Contact Person(s)
Jessie Shelton, David McKeen, and Tao Liu More details on this mode may be found in Sec. 13 of the Survey of Exotic Higgs Decays, arXiv:1312.4992.

Here, we consider the decay h→ 2γ+MET. This signature can be realized in several ways. These different cases may arise in different theoretical models, and require related but distinct strategies to observe at colliders, as we discuss below.

We focus on direct limits on the simplified models described above, ignoring model-dependent indirect limits on searches for e.g., gauginos produced via Drell-Yan. GMSB searches at the LHC have good prospects for discovering or excluding exotic Higgs decays into 2γ+MET, in both the resonant and non-resonant scenarios. The ATLAS search for 2γ+MET using 7 TeV data [4] has some sensitivity, setting limits of <~15% on the exotic Higgs branching fraction over much of the parameter space. The more recent CMS study using 4.04 fb−1 of 8 TeV data [5] sets the current best limits. This search selects events with at least two photons and at least one central jet, and bins events in 5 exclusive MET bins beginning from a minimum of 50 GeV. We show the reach of this search in the resonant and non-resonant cases in Figs. 1 and 2 (left), as a function of mχ1 in the non-resonant topology and ma in the resonant topology. In Fig. 2 (right) we show the reach in the case of the cascade topology as a function of ms, setting mχ1=0 and mχ2=60 GeV. We find that the limit obtained in this case is not very sensitive to the value of mχ2=60 GeV chosen. In all three topologies the Br(h→2γ+MET) can be constrained at the level of a few percent over much of the parameter space. 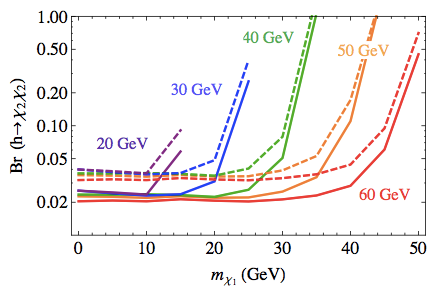 Figure 1: Approximate 95% C.L. upper limit on (σ/σSM) ×Br(h→ χ2χ2→ 2γ+MET) from the results of Ref. [5], for multiple values of mχ2 as indicated by the text labeling the different curves. Solid lines correspond to 100% photon efficiency, and dashed lines to a (flat) 80% photon efficiency.

Figure 2: Approximate 95% C.L. upper limit on (σ/σSM)× Br(h→ aa→ 2γ+MET) from the 2γ+MET search in Ref. [5]. The solid line corresponds to 100% photon efficiency, and the dashed line to a (flat) 80% photon efficiency. Left: Resonant case, where h→ aa, one a decays to γγ and the other decays invisibly. Right: Cascade case, where h→χ1χ2, χ2→ sχ1, s→γγ. Here mχ1=0 and mχ2=60 GeV (the limit is insensitive to the particular value of mχ2 as long as it is kinematically allowed).
Since searches using only 4 fb−1 of 8 TeV data and optimized for other signatures are already able to place limits as stringent as O( 5%) on the Higgs branching fraction into this mode, 2 photons + MET is a good candidate for searches in the near future. The reach could be easily extended by requiring the transverse mass of the photons and MET to be bounded from above, as consistent with resonant origin from the 125 GeV Higgs. In the resonant case, looking for a peak in the γγ spectrum could offer another useful handle.

1The s FμνFμν operator could arise through mixing between s and h, see for example Sec. , although that would lead to a very suppressed h→ 2γ+MET branching ratio compared to final states like bb+MET. For 2γ+MET to be dominant, the s FμνFμν operator would have to be generated by a direct coupling of s to electrically-charged matter, e.g. (heavy) vector-like leptons. For a similar model, see the γγjj page. File translated from TEX by TTH, version 4.03. On 11 Dec 2013, 15:34.