Ze'ev Surujon More detail about this final state can be found in Sec. 8 of the Survey of Exotic Higgs Decays, arXiv:1312.4992.

A relatively clean exotic decay mode of the Higgs boson is h→ 2γ2j [1]. Here, we consider Higgs boson decays to two scalars ss(′) which subsequently decay into photons and gluons or quarks. There are several ways in which a SM singlet scalar decays to photons, gluons or quarks. For example, it can do so via mixing with the Higgs boson, as in the singlet extensions discussed on the SM+Scalar and 2HDM+Scalar pages. This will generally give a very suppressed rate to photons compared with that of quarks or gluons, due to the electromagnetic loop factor. Alternatively, a singlet scalar s may couple to gluons and photons via a dimension-5 operator sFμνFμν, which arises by introducing new colored and charged vectorlike states and coupling them to s. Such a scenario can easily accommodate larger or even dominant s→2γ branching ratios, depending on the color vs. electric charge assignments of the new states. In principle, the 4γ mode is much cleaner than 2γ2j, which is in turn much cleaner than the very difficult 4j. However, the rate for s→γγ is typically much smaller than the rate for s→ gg and, therefore, the 2γ2j signature may be competitive with 4γ.

In [1], a search has been proposed for this channel, and the discovery (5σ) reach at the 14 TeV LHC with 300  fb−1 was derived as function of the scalar mass ms and Higgs mass mh. Gluon fusion (ggF) and W-associated production (Wh) were considered. Here we only make use of the latter, both because it provides superior sensitivity in this analysis and because the ggF study, which was conducted before the LHC came online, incorporated di-photon pT thresholds which are much lower than current triggers. The Wh analysis in [1] proceeds as follows: events are required to contain one lepton, two photons and two jets with pT > 20 GeV and |η| < 2.5 for each of these objects. Moreover, each object pair (jj,γγ,jγ,jl,lγ) is subject to an angular isolation criterion of ∆R > 0.4. The events are also required to have E/T > 20 GeV. Additional cuts made were ∆ϕγγ < 1.5, ∆ϕjj < 1.3, and |mjj−mγγ| ≤ 15 GeV. The Higgs mass resolution was assumed to be  ∼ 8−10 GeV. The signal efficiency is claimed to be between 3% and 15% within the relevant mass range. 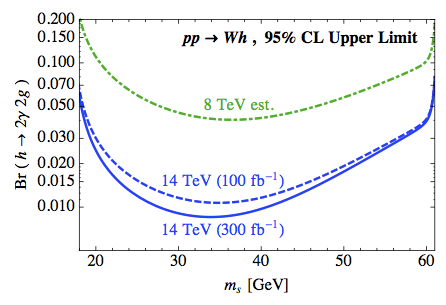 Figure 1: Projected 95% CL limits on the branching fraction for h→2γ2g in associated production (Wh), as function of ms. The blue curves refer to 300 fb−1 (solid) and 100 fb−1 (dashed), both at the 14 TeV LHC. The dashed-dotted green curve shows a conservative estimate of the sensitivity for 20 fb−1 at 8 TeV. All three limits build on the proposed search in [1] (300 fb−1 at 14 TeV LHC), by scaling background with luminosity but not changing its cross section, while signal is rescaled according to both luminosity and cross section. This underestimates the achievable 8 TeV limit. See text for more details.
Rescaling the 5 σ limit at 14 TeV with 300  fb−1 to 95% CL yields the sensitivity shown as the solid blue curve in Fig. 1. An estimate for the lower luminosity1 of 100  fb−1 is shown as the blue dashed curved. At the 14 TeV LHC, a sensitivity to Br(h→2γ2j) below 0.01 is possible for part of the kinematically allowed s mass range. This study can also be used to obtain a conservative estimate of the sensitivity at the 8 TeV LHC. We scale the production cross section down appropriately without doing so for the background cross section. This will underestimate the strength of the limit (assuming the efficiencies do not change by a large amount at 8 vs. 14 TeV). The resulting 95% CL sensitivity is shown as the green dash-dotted curve in Fig. 1. Run 1 data should be able to set a limit on Br(h→2a→2γ2j) as low as  ∼ 0.04 for some scalar masses, and likely better than that, given our pessimistic rescaling. Two comments are in order:

There are no limits from existing searches. Potentially relevant searches, such as supersymmetry searches and isolated photon-pair searches [4,5] are generally insensitive to h→ 2γ2j, since (a) they employ relatively hard cuts and (b) without a cut on the total invariant mass, the QCD background is overwhelming. The h→2γ search in the VBF mode also cannot be used to place limits on 2γ2j, since the VBF dijet tag is targeted at the forward and high rapidity gap region where a 2γ2j signal is faint.

Based on the results from [1], both the gluon fusion and the Vh associated production mode should be explored for h→2j2γ sensitivity at LHC Run 1 and 2. An interesting issue arises for very light intermediate resonances, which may result in unexpected signatures, as follows. As mentioned above, the previous search strategy involved an isolation cut on the photons. This spoils sensitivity for light s particles, since these would decay to a collimated pair of photons or gluons. One would therefore be missing an important portion of parameter space below ms ∼ 20 GeV. Using more sophisticated photon identification inspired by jet substructure techniques will improve the situation. However, for low enough ms <~ GeV , the two jets cannot be resolved, resulting in a j+2γ signature.